Hi everybody,
Here it is, the first good photo of Tina and Erwins Wedding! It is from Hello Magazine. 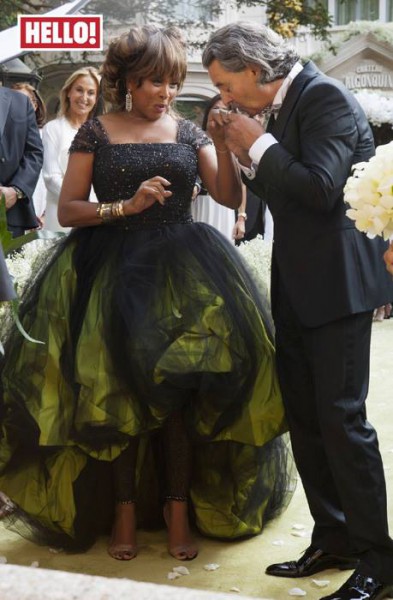 The Hello article says:
“Exclusive wedding album: Tina Turner’s stunning nuptials
Tina Turner has shared her personal wedding album with HELLO!, and has revealed the reason behind her unusual wedding dress. The singer wore a striking green taffeta and black silk tulle dress for her wedding to German music producer Erwin Bach. The couple tied the knot in a lavish ceremony at their home on the banks of Lake Zurich in Switzerland, where they were joined by celebrity guests including Oprah Winfrey and Bryan Adams.

Tina revealed that she had first spotted her Giorgio Armani gown at a catwalk show in Beijing. “I thought, ‘I gotta have that, even if I never wear it,'” she told HELLO!. “Then I thought, ‘I know, that will be my wedding dress!'” The dress was embellished with Swarovski crystals.

Johanna: I think this must be the dress from the Armani Show that Tina meant.
Thanks Boudewijn! 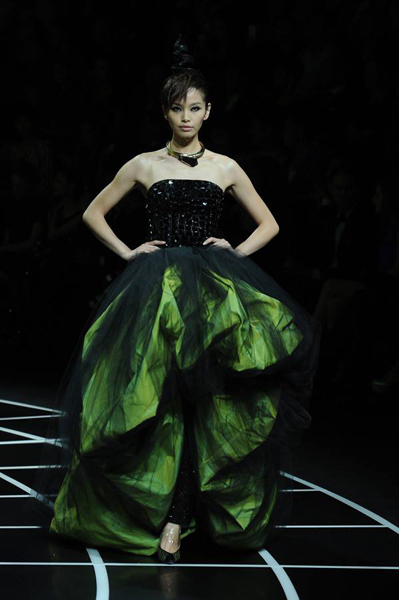 In a further break from tradition, the 73-year-old superstar requested that all her female guests wear white, while the men wore black tie.

Though a practising Buddhist for many years, Tina reveals that she chose not to have a Buddhist wedding ceremony, opting instead for “the American tradition I grew up with, tailoring it a little bit to me”.
The singer and Erwin have been together for 27 years, but she told HELLO! that she has finally reached a stage in her life that she calls her “Nirvana”.
“It’s that happiness that people talk about, when you wish for nothing, when you can finally take a deep breath and say, ‘Everything is good,'” she said. “It’s a wonderful place to be.”

I love all sorts of music, from Tina Turner to musicals and operettes.
Here is a selection and I will add more in the years to come. 😀