I am planning a journey to Egypt.

This is the route I want to take.
From Cairo to Saqqara, to Giza with the bus; then with the train to Aswan.
When we are in Aswan I want to visit Abu Simbel, with the bus or by plane.
From Aswan to Kom Ombo and Edfu and Luxor with the bus.
Then, when we are in Luxor, I want to go on a day trip to Abydos and Dendara.
And after that back to Cairo by bus.
It is a pretty busy travelplan, but I wanted to do this for a long time, so I am looking forward to it and read as much as possible about it.
If somebody has some good tips, please let me know!

Well we start by flying from Amsterdam to Cairo.
I understand that this city is overwhelming. Crowded, lots of people and traffic. And lots of things to do and see, like the Egyptian Museum. You can also visit for instance the islamatic area of Cairo, the Sultan Hassan Mosque, or you can go to the Khan el Khahlili, a market, where you can buy gold, spices and souvenirs. 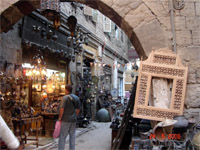 After Cairo it is off to Saqqara. Saqqara is a burial ground located near the old capitol of Memphis. Memphis remained an administrative center when the capitol was moved to Thebes (Luxor) in the New Kingdom.The nobles from Memphis and many pharaohs were buried there. Several pyramids are located there, the most famous and most visible is the Djoser Step Pyramid. This pyramid was built before the Great Pyramids at Giza. Its architect was Imhotep who was made a god for his services. The Djoser complex includes a miniature city constructed so that the Pharaoh could work in the afterlife, just as he did in this life.

Then further we go to the pyramids of Gizeh. They were built like the 3 stars from the starsystem Orion (see Milkyway). The Nile was made in the shape of the Milkyway.
The pyramids have airholes, which points to the starsystem Sirius. This all of course indicates that they were built alone or together with beings from other planets and that there is always a portal there to those other worlds. That is why these places are so important! 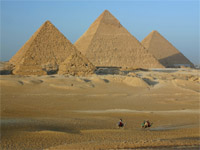 The Great Pyramid is the only one of the Seven Wonders of the Ancient World still standing. It is one of the oldest structures on the face of the earth and arguably the best built. Its mortar joints are consistently 1/50 of an inch, which is incredible craftsmanship, considering that of the over two million stones that make up the Pyramid, there is no stone weighing less than a ton, most weighing about two and a half, and some as much as 20 tons! The Pyramid covers over 13 acres and is solid masonry, not hollow or earth-filled like the Central American pyramids.

The Great Pyramid here demonstrates the remarkable character of its placement on the face of the Earth. Joseph Seiss and others have demonstrated that the Pyramid lies in the center of gravity of the continents. It also lies in the exact center of all the land area of the world, dividing the earth's land mass into approximately equal quarters. The north-south axis (31 degrees east of Greenwich) is the longest land meridian, and the east-west axis (30 degrees north) is the longest land parallel on the globe. There is obviously only one place that these longest land-lines of the terrestrial earth can cross, and it is at the Great Pyramid!

The Pyramid is at the earth's center

The Sphinx, which embodies the body of a lion and the head of a pharaoh, is believed to be the head of Khafre and his guardian spirit for his entire burial complex. Carved from the natural limestone of Giza, the sphinx has disintegrated over the years, entire pieces dropping off to the desert floor below. It is not known to have chambers inside, like those found in the pyramids at Giza.

Built when: Unknown
pedestal: 57  meter in long
Weight: Unclear
Width: The face has a width of 6 meter
Height: Total height is 20 meter; 9.15 meter from chin to head
Construction: Soft limestone


Our trip goes on. To Aswan