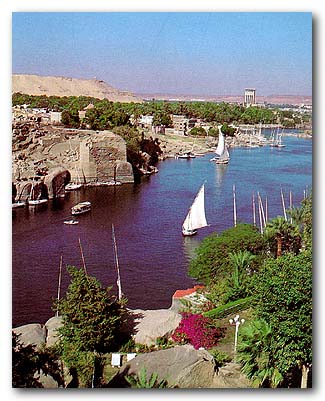 From the piramids of Gizeh we go to Aswan by train. There I want to make a trip with a felucca to the Elephantine island.

Elephantine Island is the largest of the Aswan area islands, and is one of the most ancient sites in Egypt, with artifacts dating to predynastic periods.

Elephantine is Greek for elephant. In ancient times, the Island, as well as the southern town, was called Abu, or Yabu, which also meant elephant. The town has also been referenced as Kom, after it's principle god of the island, Khnum (Khnemu). It is believed that the island received it's name because it was a major ivory trading center, though in fact, it was a major trading post of many commodities.

There are large boulders in the river near the island which resembled bathing elephants, particularly from afar, and this too has been suggested as a reason for the island's name.

When we are in Aswan I very much want to pay a visit to the temple of Abu Simbel in the south of Egypt. 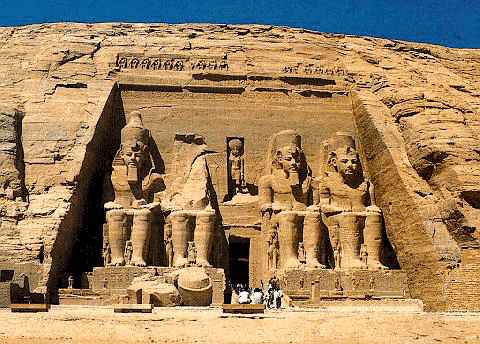 This is the great temple of Abu Simbel, dedicated to the glory of Pharao Ramses II. Though the temple is officially dedicated to the triad Amon-Ra, Ptah and Ra-Harakhte, its front is dominated by four gigantic statues of the great pharaoh himself. He had this temple built in this otherwise desolate area on the actual site of a much older shrine of a local personification of the god Horus.

A Four gigantic statues of the seated king Ramses II, which form the impressive facade of the temple

F Sanctuary with 4 statues of the gods Ptah, Amun-Ra, the deified Ramses II, and Re-Horakhte

G-K Storerooms (probably), with images of the king offering to various gods

N Stareway to the temple plateau 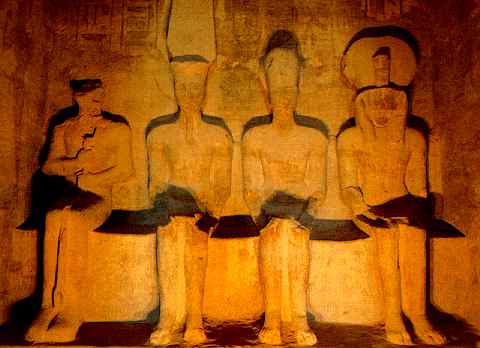 The innermost room with four statues of the seated gods Ptah, Amun-Ra, the deified Ramses II, and Re-Horakhte (from left to right), constitutes the actual sanctuary of the temple. The temple's orientation is arranged in such a way that twice every year, on 22 February and 22 October, the earliest sun-rays shine exactly through the entrance on the back wall of this chamber, illuminating the statues of the gods.

Then further we go to Luxor