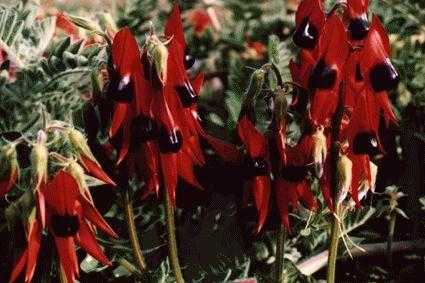 Here is a story from Australia. It belongs to the flowers on the left. They are called:

Once there lived 2 familie`s. For some reason they had a feud with each other. One day a man from the one familie fell in love with a woman from the other familie. She loved him too. He made a cloak for her from red feathers His familie found out about their love and told the man to abandon the woman or else he had to leave his home. He left and went to his woman. His familie was so furious, they killed him. The woman was desperate and cried her heart out on the spot where it all happened. When the familie later on returned to fetch his body, they only found the sturt desert peas all over the place. Like the cloak she wore.

LUCKY. . .
Mary and her husband Jim had a dog, Lucky.  Lucky was a real character.Whenever Mary and Jim had company come for a weekend visit they would warn their friends to not leave their luggage open, because Lucky would help himself to whatever struck his fancy.  Inevitably someone would forget and something would come up missing.  Mary or Jim would go to Lucky's toy box in the basement and there the treasure would be, amid all of Lucky's favorite toys. Lucky always stashed his finds in his toy box and he was very particular that his toys stay in the box.

It happened that Mary found out she had breast cancer.  Something told her she was going to die of this disease...she was just sure it was fatal. She scheduled the double mastectomy, fear riding her shoulders.  The night before she was to go to the hospital she cuddled with Lucky.  A thought struck her...what would happen to Lucky?  Although the three year old dog liked Jim, he was Mary's dog through and through.  If I die Lucky will be abandoned, Mary thought.  He won't understand that I didn't want to leave him. The thought made her sadder than thinking of her own death.

The double mastectomy was harder on Mary than her doctors had anticipated and Mary was hospitalized for over two weeks.
Jim took Lucky for his evening walk faithfully but the dog just drooped, whining and miserable. But finally the day came for Mary to leave the hospital.  When she arrived home Mary was so exhausted she couldn't even make it up the steps to her bedroom. Jim made his wife comfortable on the couch and left her to nap. Lucky stood watching Mary but he didn't come to her when she called. It made Mary sad but sleep soon overcame her and she dozed.

When Mary woke for a second she couldn't understand what was wrong. She couldn't move her head and her body felt heavy and hot.  Panic soon gaveway to laughter though when Mary realized the problem....she was covered, literally blanketed in every treasure Lucky owned! While she had slept the sorrowing dog had made trip after trip to the basement and back bringing his beloved mistress his favorite things in life. He had covered her with his love.
Mary forgot about dying.  Instead she and Lucky began living again, walking further and further together every night. It has been 12 years now and Mary is still cancer-free.  Lucky? He still steals treasures and stashes them in his toy box but Mary remains his greatest treasure.

Here is a Fairytale I received from Karlheinz Schudt from Germany. I translated it into english.
Thanks Karlheinz!!

A big Samurai had won many battles for his Lord in lots of wars during the years. However now he lost his first battle.

Discouraged, full of anger with himself and the rest of the world, he wanted to take his own life of which he felt it was worth nothing.
He rode along the dusty roads, thinking about how he could leave for the hereafter in the most cruel and striking way.
Suddenly there was a little sparrow lying on his back, stretching both his feeth into the air.

The Samurai, being interrupted in his thinking, stopped and yelled at the sparrow:
"Make way, you unworthy piece of bird"
The sparrow replied in a smart way: "No I won't. I have a very big task to fulfil".
The Samurai, very surprised and astonished about sparrow's selfassured anwer, dismounted his horse, bend forward to the sparrow and said:
Tell me, what is so important, that you won't go out of my way?"

"Oh", the sparrow answered, "they told me, that today The Heaven will fall on The Earth and here I lie to catch it with my feet"
When the Samurai heard this, he started to laugh and could hardly stop it. He yelled exploding with laughter:"What? You little featherball, you want to cath The Heaven with your thinny legs?"

The little sparrow repeated quietly and clearly:
"Well one does what one can!"