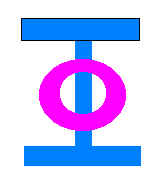 The Golden Mean, or Golden Section, is a mathematical constant, a ratio that appears in nature and was discovered by Pythagoras in the 5th century BCE This proportional ratio was used in art and architecture by the Greeks and has been used by artists ever since. Leonardo Da Vinci first called it Sectio Aurea (Golden Section). This number, 1.6180339, is the Greek Phi, or Like F, Pi (3.14156), has no end.

The three oldest Giza pyramids lay on a Fibonacci spiral and the opening to the Hall of Records is geometrically marked by the lines, which bisect the golden rectangle.

The opening to the Halls of Records, which hold the history of the Earth, is found in the right shoulder of the Sphinx.

This has been clearly marked geometrically. Looking at the picture beneath, if the golden rectangle that fits around the spiral at the Giza plateau is bisected it passes exactly through the headdress of the Sphinx. Also, a line extended from the southern face of the middle pyramid and the line that bisects the golden rectangle form a cross that marks a significant spot on the right shoulder of the Sphinx.