The Fibonacci sequence is closely related to the Golden Mean.
An example of a Fibonacci sequence is 1,1,2,3,5,8,13,21,34,55,... where each term after the second one is the sum of the two preceding terms. The ratio of each term to the previous one gradually converges to a limit of approximately 1.618, or phi. When graphed, Fibonacci curves start out rough and angular, but soon smooth out into Golden Spirals, or as near to them as is perceptible.

Leonardo of Pisa, better known as Fibonacci, was born in Pisa, Italy, about 1175 AD. He was known as the greatest mathematician of the Middle Ages. Completed in 1202, Fibonacci wrote a book titled Liber abaci on how to do arithmetic in the decimal system. Although it was Fibonacci himself that discovered the sequence of numbers, it was French mathematician, Edouard Lucas who gave the actual name of amp;quot;Fibonacci numbersamp;quot; to the series of numbers that was first mentioned by Fibonacci in his book. Since this discovery, it has been shown that Fibonacci numbers can be seen in a variety of things today.

By charting the population of rabbits, Fibonacci discovered a number series from which one can derive the Golden Mean. The beginning of the sequence: 0, 1, 1, 2, 3, 5, 8, 13, 21, 34, 55... Each number is the sum of the two preceding numbers.
Dividing each number in the series by the one which precedes it produces a ratio which stabilises around 1.618034(Phi)

Golden Spirals (or Fibonaccispirals) are formed by nesting Golden Rectangles and then connecting an arc through the corners of the resulting squares. 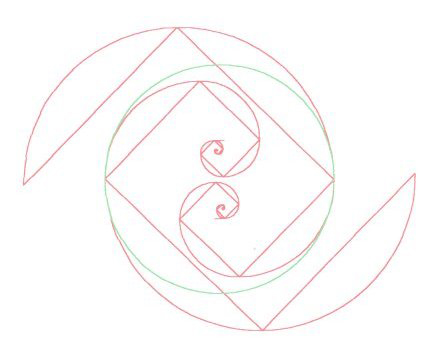