The Fibonacci Sequence is the human soul, beginning rough, but developing into and converging with the golden Spiral of nature.

The next alinea is from Charles R.Henry

For more than twenty years, I have been studying the image generating properties of reflective spheres stacked in 52 degree angle pyramids. The 52 (51.827) degree angle slope of the sides of The Great Pyramid in Cairo, Egypt embodies the Golden Mean which is the ratio that is used in Nature to generate growth patterns in space. Sacred Geometry studies such primal systems, which reveal the unity of the cosmos by representing the relationships between numbers geometrically. The Vesica Pisces is one of the most fundamental geometrical forms of this ancient discipline and it reveals the relationship between The Great Pyramid and the 2 dimensional expansion of a circle of one unit radius R as shown in Figure 1. This relationship is more completely described in The New View over Atlantis by John Michell published by Thames and Hudson. 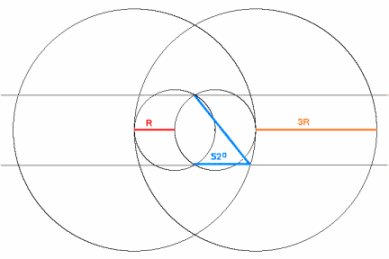 When 2 people make love and there is an impregnation, the egg cell and the sperm cell form a Vesica Pisces.
You can also see the symbol of Pisces (astrology) in the middle of it. You could say, that is how you can see, that is comes from God.
So in lots of important buildings and creations you find there is a same geometrical principle.
That is fantastic, is n`t it? That lots of things have such a divine form and are build according to a great structure.
It makes you feel little, but very good, because then you know there are great good powers and always will be!!

Potentials of Netzach: Exploring the mysteries of loving sexuality and Venusian energies, of developing artistic and creative talents, of creating harmony around us.